On this page we will be featuring a particular piece of art, taking you in-depth into the creation process.   For each feature art piece, Heather will describe her inspiration, step by step process, particulars of the medium, and the challenges she faced along the way.

The following feature art piece is a 24” x 30” acrylic painting of an Osprey which was completed in 2017. 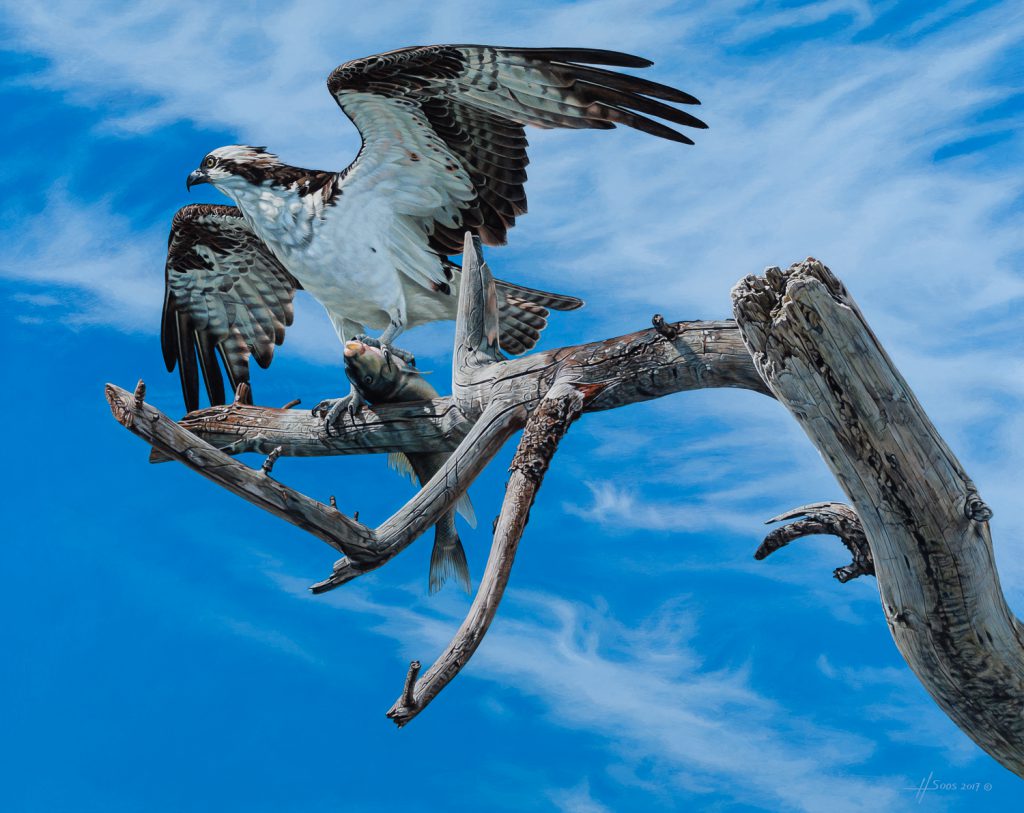 This painting was inspired after I witnessed this scene while kayaking on Lake Okanagan several years ago. After diving and catching the fish (a White Sucker), the osprey carried it to an old snag near us. Wings out, it attempted to balance the fish over a branch and consume it. It was a great opportunity for photos. My husband quickly retrieved his camera from our car and snapped several images. As is common when trying to photograph wildlife, the bird was not cooperative, often having its head down to eat or its wings folded. I had to combine several of the photos to get the dramatic pose I had in mind. I altered the end of the stump (which was cut clean off) to create a more natural composition – later I would have to get a piece of driftwood and take extra photos to help me with this. I researched online to identify this fish species and find more information and reference for the fish and osprey.

Before painting, I created thumbnail sketches to decide on my composition. I then created a full-size line drawing of the subject (the tree, osprey and fish) on tracing paper. This drawing was then refined on a second and third sheet of paper.

For this acrylic painting I chose to work on hardboard, which I primed with half a dozen coats of white gesso, sanding lightly between coats. Afterwards the board was power sanded to create a very smooth surface, which I prefer for painting. Next, I transferred the drawing onto the board.

Starting with the sky, I painted in the basic colours, covering the entire board (it is easier to judge values and colours when there is no white). From there it is a process of working over the top and gradually putting in more and more detail. I work on the whole painting, moving from one part to another, rather than finishing one area completely (skies are an exception and often need to be finished before foregrounds can be).

This painting was technically challenging. After starting, I worked on it for some time, later putting it aside for long periods before finally finishing it. I had several problems along the way…

I first opted for a clear blue sky in the background, but later realized I needed something behind the subject to increase the sense of space and distance; a cloud formation that would give drama to the picture but not take attention from the subject. I chose a cloud photo my husband had taken, and we tried it out behind a photo of the painting, using photoshop (I needed my husband’s expertise for this). I then had to repaint the sky around the osprey, which was not ideal (usually I would finish the sky first).

I found it a challenge trying to paint the contrasting textures (wood, feathers, clouds, and wet surface of the fish) while trying to give the appearance of strong sunlight and 3D form. This required me to think about and observe the appearance of light and shadow (including bounced light) on the different surfaces. The tree branch was time consuming with its intricate details. To create the soft edges of the clouds I started with a colour closest to the sky colour and created gradually lighter layers on top as I moved to the center– very time consuming! I struggled with getting the osprey right, especially painting all those feathers! I ended up working on the feathers using alternating layers of opaque and transparent paint – acrylic paint can be used opaquely or as a thin glaze. This allowed me to subtly vary the colours and values to create a soft feather-like appearance and the right brightness on the white areas of the body.

After many hours of work this painting was finally done! I decided to name my painting “The Fish Hawk” since it is one of the Osprey’s nick names and also captured the theme of my painting.

After completion, ‘The Fish Hawk’ was one of approximately 90 artworks selected for the Society of Animal Artists’ 59th Members Annual Exhibition ‘Art and the Animal’, which was held at the Briscoe Western Art Museum in San Antonio, Texas, September 19, 2019 – Jan 5, 2020. It was included with half the exhibition on a subsequent tour (ending in September 2020).